This morning we wake up to grey skies.  We have sailed through the night around the coast of Isabela and have arrived at Santa Cruz Island where we disembark to visit the Charles Darwin Research Centre and see the giant tortoise breeding programme in action.

About the Breeding Programme

Last December (2014) after more than a century without a single baby tortoise sighting on the Galapagos island of Pinzón, a small group of the tiny, shelled youngsters were spotted again.

When sailors first landed on Pinzón Island in the mid-18th century, they introduced rats to the island which fed on the eggs and hatchlings of the island's tortoises who, up until then, had few natural predators. The effect was so devastating, that over the following decades not a single tortoise offspring survived the onslaught — setting the species on the path to extinction.

In the 1960s, with only 100 tortoises remaining, conservationists launched a concerted effort to preserve the species. The few unhatched eggs that could be found were carefully collected and incubated at the tortoise center on Santa Cruz. In 1970, the first 20 tortoises were repatriated to Pinzón when they had reached an age and a size (about 4-5 years) at which they were considered “rat proof.”

Work was carried out to eradicate the rat problem on Pinzón in 2012. Now  officially declared rat free and the first wild baby tortoises

Over 2000 baby tortoises have been bred at the Charles Darwin Research Centre and  repatriated to islands within the Galapagos archipelago. 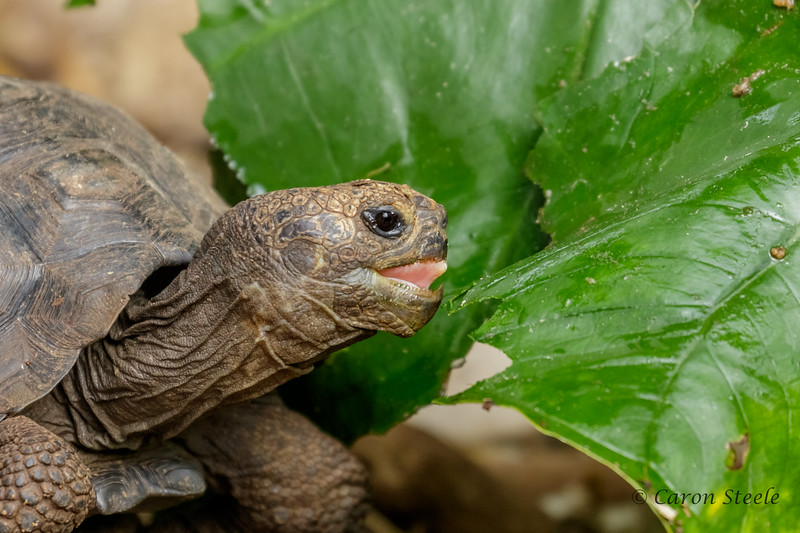 We see some baby tortoises about six weeks old who at such a tender age still manage to look ancient and wizened!

Later we all head inland to the highlands of Santa Cruz which are lush in vegetation and very wet. In fact we are caught in the midst of a very heavy tropical downpour. Undaunted we carry on searching for giant tortoises but due to the unseasonably large amount of water everywhere they are dispersed rather than gathering around the watering holes and we only find a few chomping away on the greenery with their shells glistening in the pouring rain. 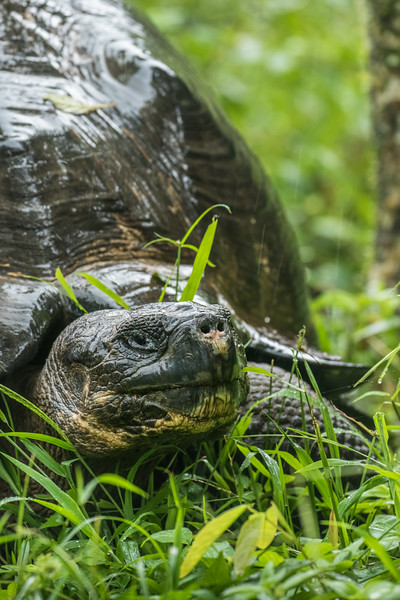 Day three, we visit Tagus Cove on Isabela Island historically a favourite site of the pirates and whalers, many of these early visitors wrote their names on the cliffs along the shore. The name Tagus comes from an English war ship that passed by the islands in 1814 looking for giant tortoises to boost its food supply. We climb up the hillside to get a spectacular view of Darwin’s Lake, a small lagoon in a crater that is thought to have been formed by a tidal wave when a volcano on Fernandina Island erupted. As we walk we discuss Wolf Volcano, seen earlier in the distance. It may erupt at any moment. It is ‘due’ an eruption it could be tomorrow or next year. Wolf is the highest Volcano in the Galapagos, standing at over 1700 metres and it last erupted in 1982. There is a fizz of excitement as we wonder if we will get to view this spectacle. As it happens the Volcano erupted about 2 weeks later on 26th May whilst I am writing this. Later in the morning we don our wetsuits and go snorkelling again. Today I am enthralled by green sea turtles feeding on the red & green seaweed and algae, which apparently makes them as high as a kite! No wonder they are so chilled in my presence.

Two feed around me for several minutes before heading out into deeper waters. They drift backwards and forwards with the strong tide grabbing mouthfuls of algae as they glide past, as if flying through the sea. They remind me of birds cruising on thermals. When they decide to power off they move swiftly and gracefully through the turbulent waters. As we head back to the ship we see flightless cormorants preening on the rocks, pelicans snoozing and a beautiful sea lion in the shadows. The combination of light, shadows and water on the sand makes it look like treacle. The textures and colours are gorgeous. At this point I’m bouncing about in the panga as if I’m on a bucking bronco so photography is a bit hit and miss – actually more miss when I review the photos! In the afternoon we visit Fernandina Island, one of the most pristine and dynamic ecosystems in the entire world. La Cumbre Volcano, which last erupted in April 2009, dominates the landscape, with lava fields stretching towards the ocean from its base. Espinoza Point is home to unique Galápagos species including the Galápagos penguin, flightless cormorant, Galápagos snake and huge marine iguanas. Thankfully we don’t spot the snakes but this is “Marine Iguana City”. They seem to be everywhere lying literally in piles on the rocks. They are marvelous creatures. I totally love them.

Marine Iguanas lie in heaps on Fernandina Island, The Galapagos

Darwin apparently was not so impressed. On his visit to the islands, despite making extensive observations on the creatures, Charles Darwin was revolted by the animals' appearance, writing: The black Lava rocks on the beach are frequented by large disgusting clumsy Lizards. They are as black as the porous rocks over which they crawl & seek their prey from the Sea. I call them 'imps of darkness'. They assuredly well become the land they inhabit. I lie down on the sharp volcanic rocks and start to get some photos… and then they start snorting. Or more technically; desalinating. Marine iguanas boast the most effective desalination gland in nature, located behind the nose it enables them to drink seawater and maintain their salt balance. Salt gathers in the gland and is then ejected from the body by ejaculating salty water through their nostrils. A series of large projectile sneezes and I was lying in the midst of it- not exactly the ‘Lynx effect’! Interspersed amongst this mass of marine iguanas majestic in their granite armour sparkled the gleaming vibrant shells of the Sally Lightfoot Crabs like rubies in the coal.

Their colours are spectacular contrasting against the blacks and greys of the iguana-strewn volcanic rocks. Time, as ever, ran out and as the sun set we had to head back to our ship, past the cormorants and basking sea lions. Once again I am struck by the unique beauty of these islands. Another day dawns after a pretty turbulent night at sea and we return to Isabela Island. The morning seems deceptively tranquil as we head off in the pangas but as we approach the shores of Urbina Bay a pretty big swell seems to appear from nowhere. A 4 foot swell comes in 5-10 minute intervals, culminating in some fairly large waves crashing on the shore. The pangas struggle to get ashore and we have to keep retreating to deeper waters as another bout of waves approach. Eventually we find a window and make a dash for it. Unfortunately one of our party slips as they climb out of the boat onto the moving sand and is knocked under the waves - camera and all. We knew it was going to be a wet landing but not a submersion! The waves come crashing in again and it all gets rather hairy for a few moments as we scramble to safety. People are screaming as they lose their footing on the moving shale-like sand and are knocked underwater by the crashing waves. Pangas and crew are battered as they struggle to get everyone ashore. Somewhat sodden and coursing with adrenaline we set of on our trail. Today we are in search of giant tortoises. Within a few minutes of walking we come across a large female tortoise quietly grazing. These docile creatures can live to be over 100 years old in the wild and are known to live longer than 170 years in captivity. Spanish explorers, who discovered the islands in the 16th century, named them after the Spanish galápago, meaning tortoise. Isabela is home to more wild tortoises than all the other islands. Its large size and notable topography created barriers for the slow-moving tortoises; apparently unable to cross lava flows and other obstacles, groups of tortoises have become isolated allowing several different sub-species of tortoise to develop.

On our trail we also come across some large land iguanas. Over twice the size of the marine Iguanas the land Iguanas grow to between 3 and 5 foot long. They are also much more colourful in shades of yellow, orange and ochre. As a result of the choppy weather we have an afternoon of relaxation as activities are cancelled due to the rough seas. The break is welcome and an opportunity to lie out on the sun deck and soak up the rays. I drift off to sleep counting the frigatebirds circling overhead. Later that evening we join the Captain on the bridge as we cross the equator and celebrate with a glass of champagne.

I travelled with Natural World Safaris who were excellent.

If you enjoyed this blog and would like to lean more about the Galapagos visit The Galapagos Conservation Trust, read their excellent articles and make a donation. The Galapagos Islands are not just a 'curiosity' they are an amazing time capsule that have enabled scientists to discover so much more about the world we live in, even how we came to be. They are an amazing and beautiful resource so if you can please donate to help all the good work the trust does.